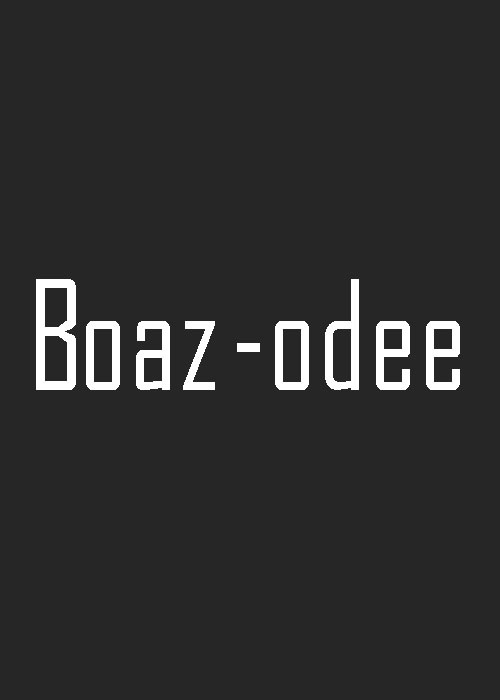 The word Bazodee always makes me laugh. It’s Trinidadian slang meaning dazed and confused. And it’s usually used to describe the behaviour of that friend who is head over heals in love with someone – i.e., “that man (or woman) have you so Bazodee”.

This word came to mind recently when reading the book of Ruth in the bible. One of the characters in this story is named Boaz. And by the end of the story, I found that I was a little Bazodee for Boaz, myself!

Let me share with you why. Ruth’s story begins with her family experiencing hard times. There have been a few deaths – her husband, father-in-law and brother-in-law have all died. And there is a famine in the land. After some time, Ruth decides to follow her widowed mother-in-law, Naomi to the distant land of Bethlehem. In hopes for a better life.

While working in a field one day, unbeknownst to her, Ruth is noticed by Boaz. A wealthy, wellrespected man of stature in the community. And a relative of Ruth’s in-laws. Now perhaps it was her beauty. Perhaps it was her work ethic, or the fact that her reputation for being a noble woman of character preceded her. Whatever it was – Boaz was very intrigued by Ruth. Becoming very interested in her well-being. Not with what he could get from her or what she could do for him. But instead, what he could do for her.

I was a little dazed and confused myself when I read a passage describing a scenario where it would have been easy for Boaz to take advantage of Ruth – but he didn’t. I read it again to make sure I was seeing straight. There was no one around, it was dark. And there at the feet of Boaz lay a beautiful young woman, dressed nicely and smelling of perfume, yet instead of letting his flesh control him. This man thought only of Ruth’s honour and reputation. In fact, he told her of his plans for the future and sent her on her way. Before she left him, he gave her food to take to her mother in-law (so she wouldn’t arrive home empty handed). Wait, what? Who is this man?! And does he have any brothers?

As I continued to read, I asked myself if God had led me to read this particular story. I mean I’d never been drawn to the story in the past – why now? And though this book had only four chapters, I found there were so many aha moments throughout. In fact, the more I read the more I recognized the markings of a template, a formula for a good life. – Ruth focused on providing for her household first and foremost

– Patience, Resilience, Kindness, Respect, Integrity, and self-control are themes throughout the book of Ruth

The story continues with Boaz making a legal transaction that would ultimately secure the futures of both Ruth and Naomi in a very positive way.

Another aha moment happened when I read the NIV version of chapter 4 verse 13. There it tells us that Ruth became Boaz’s wife and “when he made love to her, the Lord enabled her to conceive.” Interesting – did you catch that? What came first, the chicken or the egg? The “love making” or the marriage and prosperous life? Listen I get it – I’m not perfect either. And I’m not judging you or myself when I make this point. I’m just sharing with you that when I read this, I felt a strong confirmation that I was not only supposed to find this story but that I should share these thoughts with you as well. If we’re all desiring a better life, a better love story. Then perhaps we’ve got to make some changes in the way we’re going about it. But again, no judgement. My goal here is to make you think and to possibly start a good conversation amongst friends.

So may I encourage you to take some time and read the book of Ruth for yourself. I’d love to hear what stands out to you. What insights you may have discovered in the story. And to all my single ladies out there, let’s set aside the Bazodee that the world has to offer and instead strive to be productive women of noble character. Able to recognize our BOAZ-ODEE when he finds us. Amen? Amen!